Cork East Fine Gael TD and Minister of State at the Department of Justice and Equality, David Stanton has welcomed the passage of the Domestic Violence Bill 2017 through the Oireachtas. This landmark bill consolidates and reforms existing law in relation to domestic violence and creates a number of new legal protections for victims.

“I am delighted that the Domestic Violence Bill has now been passed by both Houses of the Oireachtas. I would like to acknowledge the work of all those involved in the passage of this Bill including my colleagues Minister for Justice & Equality, Charlie Flanagan TD and the previous Minister, Frances Fitzgerald TD. I would like to give particular thanks to organisations who support victims of domestic violence whose help was invaluable”, said Minister Stanton.

He continued: “This Bill is one of the most important pieces of legislation to come before the Oireachtas this year. In addition to consolidating and reforming existing legislation the Bill will also bring us closer to ratification of the Istanbul Convention on preventing and combating violence against women and domestic violence”, said Minister Stanton.

The Programme for a Partnership Government includes a commitment to implement in full the Istanbul Convention and the commitments contained in the Second National Strategy on Domestic, Sexual and Gender-Based Violence 2016-2021. Protecting and supporting victims of domestic violence has been a key priority for this Government and the Domestic Violence Bill is a key part of this process. It builds on existing improvements such as the removal of a financial contribution for civil legal aid in the District Court since 1st January 2018.

“For too long domestic violence has been seen primarily as physical abuse but it can, in fact, have devastating physical, emotional and financial consequences for victims, their families and society as a whole. I believe that this legislation will help to improve the protection of the law for victims of domestic violence, as it puts the needs of victims first and foremost. It creates a number of new offences such as coercive control and forced marriage and provides that the existence of an intimate relationship between the perpetrator and victim be an aggravating factor at sentencing. I look forward to its enactment.” 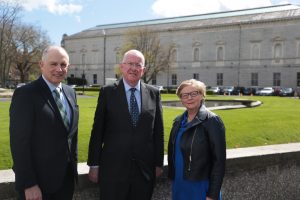 Additional info:
The main improvements to the law contained in the Domestic Violence Bill are as follows:
• There will be an extensive list of factors that a court must consider when dealing with an application for a domestic violence order. The list is not exhaustive and will not limit a court’s discretion to make an order.
• The requirement for a relationship to be “committed” to enable a person to apply for a domestic violence order has been removed.
• Where a court is satisfied that the threshold for making an order has been reached, it must make an order.
• Domestic violence orders will remain in force in respect of dependants after they reach the age of 18, until the orders expire.
• Safety orders availability to those in intimate relationships but not cohabiting.
• Victims of domestic violence who are cohabiting with, or are parents of, the perpetrator will be able to apply for an emergency barring order lasting for 8 working days, where there is an immediate risk of significant harm. Emergency barring orders may be granted even if the victim has no legal or beneficial interest in the property or an interest which is less than the perpetrator’s.
• When making a safety order or barring order, courts will be able to prohibit a perpetrator of domestic violence from communicating with the victim electronically.
• The Bill will provide protection against cross-examination conducted in person.
• Requirement for courts to give reasons for decisions regarding applications for orders under the Bill.
• Special out-of-hours sittings of the District Court may be requested by An Garda Síochána where necessary to deal with urgent applications for orders.
• Victims will be able to give evidence by live television link to avoid intimidation.
• Victims will be able to bring a friend, family member or support worker into court to support them during proceedings.
• Children will be able to make their views known to the court where an order is sought on behalf of, or will partly relate to, a child. The court will have the option of appointing an expert to assist the court to ascertain the views of the child.
• The Courts Service will have an obligation to offer information on support services for victims of domestic violence.
• The courts will be able to recommend that a perpetrator engage with services and programmes on, addiction or counselling services.
• Restrictions will be put in place on media reporting and attendance by the general public at criminal court proceedings for breaches of civil domestic violence orders.
• The Bill will provide for a new criminal offence of forced marriage.
• The Bill will provide for a new criminal offence of coercive control, the psychological abuse in an intimate relationship that causes fear of violence, or serious alarm or distress that has a substantial adverse impact on a person’s day-to-day activities.
• Where a person is convicted of a violent or sexual offence against his or her spouse, civil partner or person with whom they are in an intimate relationship, that fact shall be an aggravating factor for the purposes of sentencing.
• Part 3 of the Criminal Evidence Act 1992, which relates to special protective measures for giving of evidence by victims and witnesses in criminal proceedings for violent or sexual offences, will apply to the offences of breaching a domestic violence order, coercive control and forced marriage.
• Legislation that enable persons under the age of 18 to marry will be repealed.