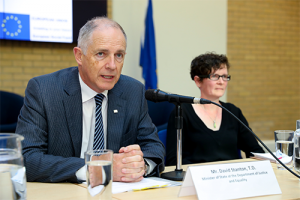 On the 22nd of September 2016, I launched the call for proposals for migrant integration and gender equality projects.  This is a very significant funding package with a total of €13.3 million over a four year period being made available for migrant integration and gender equality projects.  The new Migrant Integration Strategy is in the final stages of development in the Office for the Promotion of Migrant Integration. The Strategy is hoped to be published later this year.

In developing the new Strategy, broad consultation was undertaken, in which many community and voluntary organisations participated.  The new Strategy will guide our work in this area in the coming years across the full range of policy areas that influence the integration of migrants.

In addition to these funding programmes, my Department is also working hard on other initiatives to support migrants and women. A new National Women’s Strategy is currently being developed.  The development of this strategy will be informed by a broad consultation, including regional meetings and an opportunity to make written submissions.  Both the Tánaiste and I will take an active part in the consultations.

One area to be addressed in the new Strategy is the employment of women. The employment rate in Ireland for men currently stands at just under 70%, while the corresponding rate for women is just less than 60%. It is an important gender equality policy goal to increase women’s overall participation in the labour market, which offers greater economic independence and reduces the risk of poverty in later years.