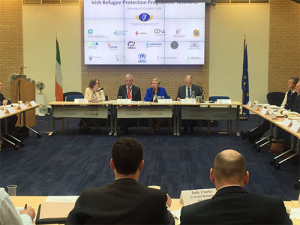 We are committed to taking in 4,000 people under the September 2015 Government decision establishing the Irish Refugee Protection Programme. 2,622 people are to be taken in under the EU Relocation scheme from Italy and Greece and 780 from Lebanon under the refugee Resettlement programme. The programme is overseen at national level by an Inter Departmental Working Group chaired by the Office for the Promotion of Migrant Integration (OPMI) in my Department. At local level the programme is overseen by an inter-agency working group established in each receiving community and chaired by the Local Authority.

There are two strands under this programme: The first is the Relocation Strand which is the transfer to Ireland from other EU countries of people seeking asylum, who then enter the Irish asylum system. Under EU rules, to be eligible for relocation a person must be of a nationality with a high refugee recognition rate, e.g. persons from Syria. This is to minimise the chances of a relocated person ultimately failing to be accorded refugee status under the Irish system.

In relation to the EU relocation mechanism, it is well documented that the pace of arrivals under this programme to date has been slower than anticipated. The Government is wholly committed to ensuring that Ireland meets its obligations under the EU Relocation mechanism in a timely fashion. Intakes will continue throughout 2017 at the levels required to allow Ireland to meet its commitments within the timeframes envisaged under the EU Relocation Decisions.

The second strand is the Resettlement of refugees, which covers the transfer of people recognised as refugees by the UNHCR from countries outside of the EU to Ireland. Under the Resettlement part of the IRPP, 520 refugees were to be resettled in Ireland by 31 December 2016.